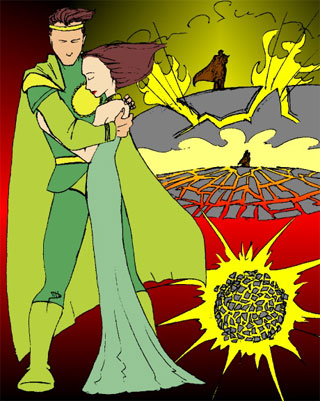 The Destruction of Krypton


He'd tried.  God knew Jor-El had tried.  But the end would come sooner even than he had thought.  Probably before the sky over Kryptonopolis turned red with daylight one more time.  Only a superman could finish pounding together the family-sized starcraft before stresses at the core of the planet splattered Krypton across the galaxy.

Since two stranded space wanderers found each other on the big red planet ten thousand star orbits before, the world had been in its death throes.  In geological terms it had been enough time to draw a final breath.  In human terms it had been over seven hundred wildly successful generations.  Enough time to build a prosperous, self satisfied civilization.  Enough time to grow proud of a race that had tamed a world so unfit for human life that early generations had to sleep more than half the day and felt more comfortable crawling on all fours than walking erect.  The gravity was that intense.

If ever in the history of the galaxy there had been a test of survival of the fittest among the human family, it was on Krypton.  The weak died before they could produce offspring, yet the infant mortality rate was frightful for thousands of years.  But here, as on the thousands of other more habitable worlds across the stars to which man had migrated, the human species displayed its surprising adaptability.  The land changed man long before man changed the land.

The race's physiology was subtly altered while outward appearances changed very little.  Muscle tissue became denser.  Motor reflexes became sharper.  Perceptions broadened.  Optic capacities widened.  A whole new range of physical abilities began developing, just to allow human beings to live under normal conditions on a planet whose gravity was monstrous, whose weather changes were drastic, whose sun was unusually variable as to heat and generally too dull as to light intensity.  Finally, when the suffering was near an end, when subsistence on resources of a near-depleted planet became possible, the race of humankind began to spread north and south from the relatively low-gravity equatorial regions, and the humans began to build.

They built with a vengeance, these tuned-up humans.  With vengeance, and ruthlessness, and a good deal of bloodshed.

To begin to build Krypton they had to hack ruthlessly at jungles of rock-tough vegetation and forests of molten lava.  They had to do what worked—fast.  Those who do not let nature stand in their way do not allow other humans to do so, either.  In building, as in adapting, the primary rule was to survive.

Once a civilization began to come together on Krypton, humans began to turn their attention to values.  Among the creatures of the Universe humans possess a relatively high capacity for good.  The Kryptonians took as an assumption of their lives the fact that there was a right and a wrong in the Universe, and that value judgement was not very difficult to make.  To kill, for example, was wrong.  To give somebody food, for example, was right.  Through generations of slavery, warfare, and of human sacrifice in the name of progress, the population of Krypton ached inwardly for tranquility.

The humans of Krypton became tranquil too soon.  That was to be their downfall.

Given that there is a right and a wrong in the Universe, it is easy to conclude that the death penalty imposed by those in authority upon those who commit terrible crimes is wrong.  When the Kryptonian people turned their attention to polishing off their hard-won civilization with values, capital punishment was one of the first things they abolished.

Criminals were, as a rule, a troublesome group of people.  The problem was not that they were difficult to apprehend, but that they were quite a bother to keep both alive and away from law-abiding society at the same time.

Jor-El first came into prominence as a scientist by devising a method to do that.

Barely finished with his education, young Jor-El presented his "phantom zone projector" to the stodgy group of gentlemen who governed Krypton, the Science Council.

Now, instead of putting convicted criminals into suspended animation and shooting them into orbit around the massive planet, a less costly and far less troublesome practice was instituted.  Jor-El postulated a plane of existence on the border of his own, and he devised a method to enter it.  His theory was correct.  So now criminals were chained to a wall and exposed to a phantom zone ray.  They were, in entering this borderworld, effectively reduced to non-corporeal form and made to serve their sentences as ghosts, able to witness events but not influence them.

Jor-El found the gates of Hell—and this was what gave the young man access to the Science Council.  Someday, it was said, Jor-El would chair that council.

For some time Jor-El was a rising star among his fellow Kryptonians. His mind was the marvel of his age.  Heir to a long line of scientists, inventors, explorers, and public administrators, he grew up listening to his father, the industrialist who popularized mass production, his mother, a prominent social activist, his uncle, the inventor who found the first practical uses of geothermal energy, and an older cousin who was a great spiritual leader talk about the future of Krypton as if the world were a social laboratory of unlimited possibilities.  The young man was never led to suppose that anything within the realm of the human imagination was impossible.

No one on Krypton had ever possessed the talents for theory as well as technical application that came so natural to Jor-El.  After the phantom zone discovery, Jor-El designed and built a prototype family-size traveling vehicle on three wheels which could be produced cheaply and was powered by Krypton's nearly limitless supply of thermal energy.  Following close behind that accomplishment was the intelligence analyzer, a device that could measure the activity of a waking brain and determine the level of the brain's development.  It measured the natural ability of a newborn child as well as the success of the individual in taking in information through his period of education.  Jor-El's own quotient, of course, was beyond the device's ability to measure, as was that of his wife Lara.  Even Jor-El, however, was taken aback by the reading he got when he exposed his infant son Kal-El to the analyzer.

There were dreams of space travel running through Jor-El's mind.  the only viable power source on the planet was Krypton itself, where turbulent forces at work below the crust produced heat that could be effectively mined and harnessed.  For space travel, Jor-El was convinced, the solution was understanding the fields of gravity that held the Universe together.  He had visions of starships sailing gravitational winds between the stars at speeds approaching that of light.  Jor-El was toiling over figures and data trying to design a unified, coherent gravitational theory when he chanced upon some alarming information that conventional modes of thought as to the nature of the planet could not explain.

It was over three years before the event took place that Jor-El discovered Krypton would explode.  He had made his announcement in secret to the Science Council.

"I think young Jor-El is scared of a few groundquakes," Vad-Ar the Elder said, expressing the general view of the councilors.

The Science Council, along with the great majority of the Kryptonian people, had grown soft and complacent.  They had tamed a harsh world, these humans, and now it was time to relax and enjoy their accomplishments.

Let anyone suggest that these accomplishments would soon be swept away in a single fit of cataclysmic fury, and he would be laughed at.  Let anyone persist, and a public mockery would be made of him.

As far as the public was concerned, it was a buffoon, a crackpot sick with overwork who stood welding plates of alloy into the hull of the starcraft through this restless night.  Birds and insects flew this night, herds of animals stampeded across ground never to be subjugated by humans.  They knew.  And men still laughed at Jor-El.

"Jor-El.  What are you doing?"  The scientist's young wife Lara stood in the doorway of the workshop wrapped in a housecoat.  She carried Kal-El, their son, in her arms.

"We're going to have to leave before dawn.  Go back to bed and let me finish this thing."

"Jor, I woke up when I heard the baby crying and I found myself alone.  Now I find you in here, telling me we're going to leave our planet—our planet, for the love of all that's holy—before dawn.  You want me to go back to bed?"

"You have the choice of sleeping or winding yourself into a frenzy.  If you choose the latter, I suggest you do it somewhere else, because it will only hinder my work."  Jor-El didn't look up from his tinkering.

"You've already worked yourself into a frenzy, Jor.  And you've lost your perspective because of it."  The infant in Lara's arms began to whimper.

"Go back to bed, woman."  Jor-El snapped on a pair of goggles and picked up a liquid mortar burner to weld.

"You may have observed that women have not been at their husbands' command for several centuries now.  And if you turn on that burner while I'm talking, you may also notice—"

He turned it on and Kal-El began to cry at the sudden noise.

Lara was about to turn off the geothermal generator from which the burner drew its power when a tremor shook the burner from Jor-El's hand.  Before the burner hit the floor the generator was dead.  The tremor had severed the generator's line to a power source below the surface of the planet.

"Damn!"  Jor-El glanced toward the makeshift launching rig already set up in the open bay window of the workshop.  "Look out there, Lara.  The spire over the Science Council chambers is toppling."

"You'll soon hear screams in the streets as well.  Put the child down and help me set up that prototype craft on the launcher.  I wouldn't have finished the big ship in time, anyway."

"But that little thing—it's only big enough for one person."

"Two, if they squeeze a bit.  Give me."  Jor-El gruffly took the howling infant from Lara and placed him on a workbench.

"What do you think you're going to do with this toy, Jor?"  Lara helped him set the seven-foot prototype starcraft on the rig at the window.

"Send you and the child into space.  Here, let me get that navigational unit off the big ship's nose."

Jor-El ignored her and went about fixing the little silver navigational mechanism to the tip of the child's craft, ready to separate and eventually fly several light-hours ahead of the main unit.

As he did that, Lara found two musty blankets in a closet.  She wrapped the red and blue blankets around the infant, who was already struggling in a yellow sheet.

Jor-El finished a few final calculations and turned to his wife.  "Get aboard, Lara."

"My place is with you.  The ship will have a batter chance of escaping Krypton's gravity without my weight, anyway."

"Your place is wherever you can survive—and that isn't here."

"An accident of language.  Get on."

"No.  I am a Kryptonian woman, and Krypton is dead.  Give the child a chance."

Jor-El wasn't surprised, only disappointed.  He pulled a prepared recording disc from a shelf and slipped it into a slot on the navigational unit.

"My dear God," Jor-El whispered as the rocket carrying its tiny burden lifted off amid the crashing of metal and rock.  "May the starwinds guide your course, Kal-El."

And the vacuum of space muffled the star child's wailing as a giant world ripped itself apart. 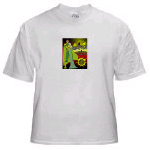